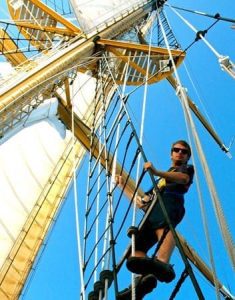 Junior Justin Falcone, who has dedicated his personal and academic pursuits to studying and addressing the global implications of climate change, was recently named one of 59 recipients of the prestigious Harry S. Truman Scholarship. The awards are given annually to U.S. college undergraduates with demonstrated leadership potential and a commitment to public service.

The winners, who represent 52 colleges and universities, were chosen from a group of 655 nominees. Recipients are awarded up to $30,000 for graduate study.

Falcone, who is studying environmental archaeology and minoring in global environmental change and sustainability, is the first winner from Johns Hopkins since 2010. He plans to pursue graduate studies in environmental science, management, and policy.

“The Truman Scholarship is more than a bridge that connects scholars to the places, both literal and academic, that they want to go,” Falcone said via email from Scotland, where he is studying abroad this semester at the University of St Andrews. “Although it serves that purpose, it is also a diverse community of leaders and change agents united by a passion for making a difference. I’m humbled to be a part of that community.”

Johns Hopkins University President Ronald J. Daniels called Falcone to let him know he had been selected for the award.

Falcone, a native of Cinnaminson, N.J., spent the summer of 2012 in the shadow of Sicily’s Mount Etna, Europe’s most active volcano, where, he wrote, he “began to realize how environmental forces impact the cultural fabric of island communities in unique ways.”

Using funding from Johns Hopkins’ Woodrow Wilson Undergraduate Research Fellowship Program, he sailed from Tahiti to Hawaii during the spring of 2013 and documented the impact climate change is having on the island communities most vulnerable to rising sea levels. He visited the Society, Marquesas, and Tuamotu islands, as well as the Phoenix islands, which are among the 32 atolls that make up the island nation of Kiribati. In Hawaii, Falcone worked on an organic farm in an area of the rain forest that has recovered from volcanic activity.

Photographs from his travels documenting the effects of climate change are scheduled to be displayed at the Milton S. Eisenhower Library on the university’s Homewood campus during the 2014-15 academic year.

“I have always been a person of multiple interests that pivot around human-environment interactions,” Falcone wrote. “While I intended to study how past Pacific communities have experienced climate change so that data could be applied to future models, I realized I could insert myself into the present equation.”

Falcone took a particular interest in Kiribati during his excursion and, once home, launched Project Kiribati, the first international initiative designed to support a sustainable clean water infrastructure for the low-lying South Pacific island nation. The group has partnered with Johns Hopkins Hospital—via its Supporting Hospitals Abroad with Resources and Equipment (SHARE) group—and others to supply medical equipment, vitamins, and water purification tablets to individuals living in Kiribati.

The effort is an offshoot of the Alliance for Clean Water (ACWa), a Johns Hopkins student group founded by Falcone that is dedicated to the protection of clean water in natural and urban environments. The group, which is associated with the university’s Center for Social Concern, conducts service trips, including “canoe and clean” outings to remove plastic waste from local estuaries, research trips to test the water quality of aquifers, and education trips designed to instill an appreciation of the watersheds that supply Baltimore’s water.

Falcone is also the inventor of patent-pending environmental technologies developed with the help of the university’s Office of Technology Transfer. He is a Bloomberg Scholar and a Woodrow Wilson Fellow and a former participant on the Apolline Project’s archaeological expedition at the north slope of Mount Vesuvius. This summer he will be a member of a NSF REU team at USC’s Wrigley Institute on Catalina Island, where he will utilize geospatial technologies in the study of coastal climate change.

“I will devote my career to environmental policy because I wish to help those communities most endangered by climate change today,” Falcone wrote in his Truman scholarship application. “I believe in using every tool at my disposal—tech innovation, service, policy, art—to act as an agent of change who considers both where we came from and where we are going.”