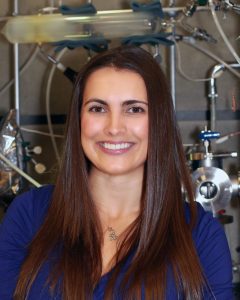 The Morton K. Blaustein Department of Earth and Planetary Sciences congratulates our colleague professor Sarah Hörst, who is a recipient of the 2020 James B. Macelwane medal from the American Geophysical Union.  Each year the medal recognizes three to five early career scientists across all subfields of Earth, Atmosphere, Oceanic and Planetary Sciences.  Professor Hörst’s citation highlights the work she has done in establishing the Planetary Haze Research laboratory to study the photochemical production of hazes in planetary environments (including the first studies of hazes in extrasolar atmospheres) as well as her outstanding accomplishments in service to the broader scientific community.

The study of hazes is of interest to many branches of the natural sciences. Biologists and biochemists have long that under the right conditions adding energy to relatively simple mixtures of common gasses like water, methane, ammonia and hydrogen could produce the much more complex molecules like amino acids that form the building blocks of living organisms.  The absorption and scattering of radiation by hazes plays an important role in determining whether planets are habitable, and has thus been of interest both to geologists studying the evolution of Earth’s atmosphere as recorded in Earth’s rock record and astronomers looking at distant planets. One world of particular interest has been Titan, the haze-covered moon of Saturn which will be explored by the recently-funded Dragonfly mission run out of the Johns Hopkins University Applied Physics Laboratory.

To date, much of the work on hazes has focused on small particles formed by pollution in the modern Earth atmosphere, as such particles have important implications for human health. But this means that the very different conditions on worlds such as Titan, Venus, and the early Earth have received much less attention. Prof. Hörst’s work has demonstrated that Titan was the site of some surprising haze chemistry and this work has been important both in motivating and designing the Dragonfly mission.  In recent years, her group has also published the first work to look at gas combinations more typical of extrasolar planets. In 2019, she received the Early Career Award from the Laboratory Astrophysics Division of the American Astronomical Society.

The Macelwane award is given in memory of Father James B. Macelwane, a Jesuit priest who was one of the founders of American seismology.  Macelwane used his strong theoretical abilities to develop new instruments, applied these to pioneering studies that advanced the science of geophysics, and was dedicated to using this science in the service of humanity. It’s entirely appropriate that this award go to someone like Prof. Hörst who has worked on developing new instruments, advancing fundamental science, and serving the broader community with excellence. Congratulations Sarah!