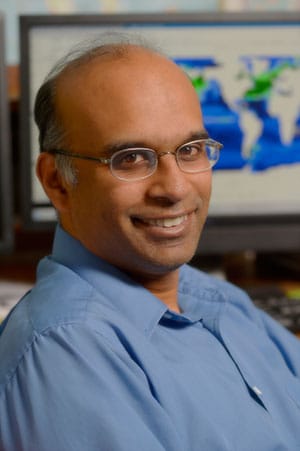 Anand Gnanadesikan trained as an oceanographer. His primary expertise is in how the ocean circulates and influences marine life, climate, and atmospheric chemistry. Gnanadesikan earned his PhD from the MIT/Woods Hole Joint Program in physical oceanography and spent more than 15 years at Princeton University and NOAA’s Geophysical Fluid Dynamics Laboratory working to develop computer models of how the planet works.

He joined the John Hopkins faculty in January 2011.

I use numerical models and large datasets to explore how the ocean interacts with the biosphere, atmosphere and cryosphere. Areas of particular interest include:

1. The role of mixing in setting the large scale circulation and chemical properties of the ocean. Because the ocean is strongly stratified and weakly forced, exchange between the deep interior and surface can take many, many years. I’ve looked at the role of breaking internal waves which mix in the vertical in driving this exchange- arguing that they play a much smaller role than previously thought. By contrast, the oceanic equivalent of weather systems are much more important.

2. Modeling ocean biology and chemistry: My interests in understanding vertical exchange has led to a productive line of research looking at oceanic tracers, which are often more sensitive to mixing than are temperature and salinity. Particular interests include radiocarbon and open-ocean hypoxia. I’m also interested in ways that biological cycling can feed back on the physical climate, through altering the carbon cycle and ocean color.

3. Understanding variability in the Earth System: My interests here lie in understanding the physics by which the climate system changes on time scales ranging from annual to multimillennial. The Southern Ocean is a primary region of interest here, though in recent years I’ve started looking more at tropical variability and the North Atlantic as well.