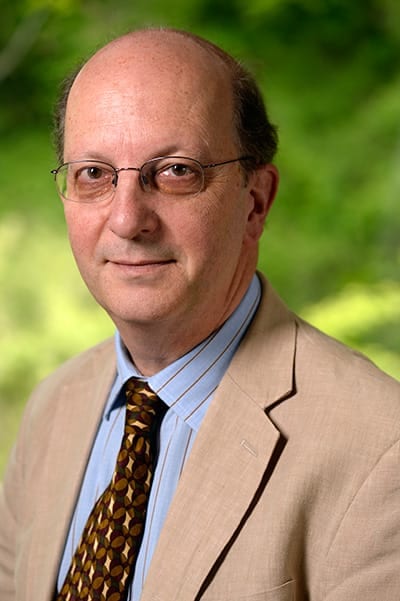 Dimitri Sverjensky was born and raised in Sydney, Australia. An early interest in bird-watching, together with a love of the outdoors, lead to the study of geology at Cranbrook School. There, as a teenager, he first learned the formulas of complex minerals, such as tremolite, under Frank Tebbutt. Subsequently, at the University of Sydney, he was trained in Crystallography by Ian Threadgold. Under the influence of Dal Swaine and Ron Wilkins, it became clear to him that he wanted to pursue the combination of geology and chemistry, i.e., geochemistry.

This interest in geochemistry led him to the PhD program at Yale University, where he worked with Danny Rye and Brian Skinner, and was also greatly influenced by Bob Berner and the late Phil Orville and Karl Turekian. His PhD research investigated the origins of base-metal sulfide ore deposits in sedimentary rocks and the origins of fluids in sedimentary basins. His first position after graduating in 1980 was at Lawrence Berkeley Laboratory studying oil-field brines. While there, he started a collaboration in theoretical geochemistry with the late Harold C. Helgeson at the University of California, Berkeley, an association and friendship that lasted 27 years. After a three-year stay at SUNY Stony Brook as an assistant professor, he was hired in 1984 by Johns Hopkins University where he has been ever since.

My current research is devoted understanding how water in the deep Earth has affected the evolution of the planet. My group has developed a novel picture of the role of water in the deep Earth and its influence on the development of the planet and long-term habitability of Earth. I specialize in theoretical geochemical modeling in collaboration with experimentalists and petrologists. Integration of experiments, petrologic data, and theoretical modeling is the key to understanding the evolution of Earth and a basis for investigating other planets.

I am enjoying an experimental and theoretical modelling collaboration with Professor Isabelle Daniel at the Université de Lyon 1, in Lyon, France. This work was initially funded in 2010 by the Alfred P. Sloan Foundation through the Deep Carbon Observatory, a major international project devoted to studying Earth’s deep carbon cycle. Carbon, a key element for life on Earth, is carried down into the deep Earth by tectonic plates. How it returns from depth back out volcanos has long been a puzzling mystery. Considerable uncertainty also surrounds the question of how much carbon goes into the deep Earth versus how much is returned to Earth’s atmosphere. Isabelle Daniel is a mineral physicist known for her expertise in experiments in the diamond-anvil cell, in which samples of minerals and water can be squeezed to elevated temperatures and pressures mimicking those in the deep interior of the Earth. I contribute expertise in theoretical geochemical modeling of the experiments.

All of this research laid the foundation for me to develop a novel theoretical model in 2014 for the behavior of water in the deep Earth (Sverjensky et al., 2014; Facq et al, 2014; Pan et al., 2013). Using the Deep Earth Water (DEW) model, it appears that water at very high temperatures and pressures plays a key role in transporting carbon on its return from the deep Earth back out through volcanoes. Water thus enables carbon and other chemical elements vital to life on Earth, such as nitrogen and sulfur, to be replenished in Earth’s atmosphere from the deep Earth over geologic timescales. Furthermore, aqueous fluid-rock interactions in the Earth help set the oxidation states of magmas, which determines the redox states of the gases emitted to the atmosphere, and hence the long-term habitability of Earth.

The origins of nitrogen in planetary fluids and why Earth’s atmosphere is special (Mikhail & Sverjensky, 2014).

Additional research endeavors and collaborations stemming from the Deep Carbon Observatory, include:

ENKI is a multi-institution effort aiming to transform research and education in the fields of geochemistry, petrology and geophysics by providing software tools in computational thermodynamics and fluid dynamics. The overall aim is to modernize how thermodynamic and fluid dynamic models are used by the Earth science community.

This project aims to produce the first integrated chemical thermodynamic model of fluids and melts. The fastest carbon transport in the Earth is mediated by magmas and fluids. The amount of carbon in each of these mobile phases is currently the subject of intense research by a broad range of scientists. It is also widely recognized that magmatic melts and fluids can coexist and communicate chemically, and that at mantle pressures they can become completely miscible into one mobile phase. However, despite the importance of carbon transport by both fluids and magmas, there is no integrated model of chemical communication between these reservoirs.

The objective of this proposal is to develop predictive theoretical models for investigating the nature and reactivity of deep fluids in the Earth with specific application to the deep carbon cycle. Chemical mass transfer models will be developed to enable a quantitative understanding of the chemical processes involved in the formation of diamonds from metasomatic fluids in the peridotitic environment of the subcratonic lithospheric mantle.

Undergraduate and beginning graduate: "Geochemistry of the Earth and Environment".; "Aqueous Geochemistry"